BIANYS is proud to announce that we have received the 2015 Brain Injury Association of America Award for Excellence for Advocacy. BIANYS Executive Director Eileen Reardon was presented with the Award by BIAA President and CEO Susan Connors at the BIAA Leadership Conference in Tampa, Florida. The award was given to BIANYS for our involvement in the National Advocacy Day in March in Washington DC.

Congressional Brain Injury Awareness Day is a national event sponsored by the Congressional Brain Injury Task Force, chaired by Congressman Bill Pascrell of New Jersey and Tom Rooney of Florida. The day included a brain injury awareness fair, a briefing on brain injury, and a reception. This year, Representatives Pascrell and Rooney introduced the National Traumatic Brain Injury Research and Treatment Improvement Act, and updates from the Centers for Disease Control and Prevention presented findings and recommendations on brain injury.

Brain Injury Awareness Day is important because it is the one day dedicated to educating federal representatives about brain injury and how vital federal funding is to continue the Federal TBI State Grant Program, Centers for Disease Control and Prevention TBI Programs, and brain injury research conducted by the TBI Model Systems. The BIANYS contingency met with the offices of legislators from New York State to discuss the need for increased awareness and resources related to brain injury. Group members made the case for the impact brain injury has on individuals and families by sharing their stories and pressing for action.

BIANYS thanks BIAA for recognizing the advocacy work of our members. We also want to extend a big thank you and congratulations to all who joined us in Washington in March. Below are photos from Congressional Brain Injury Awareness Day 2015 and of the Award for Excellence for Advocacy with office staff.

Congressional Brain Injury Awareness Day will be held next year on March 16, 2016. Please also mark your calendars for the first Brain Injury Advocacy Day at the Legislative Office Building in Albany on March 23, 2016. 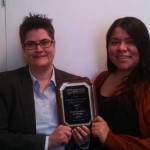 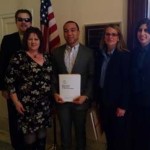 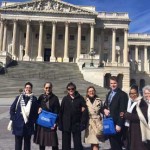 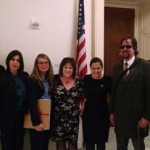